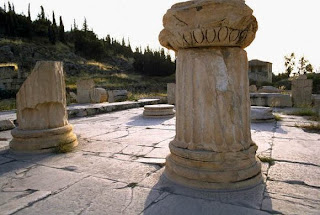 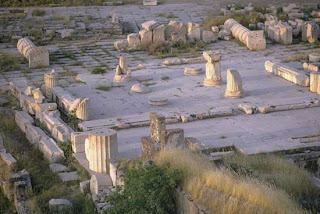 The immediate destination of the imperial entourage was Athens. They were to arrive in the over-crowded city in September 128 AD to participate in the Great Mysteries of Eleusis. Hadrian had already taken part in 125 AD and was initiated into the grade of mystes. He was the first Emperor since Augustus to have done this. Hadrian, with his mystical yearnings, now wanted to become an epoptes, or 'one who has seen', a higher grade of initiation that few people great or small ever achieved.

From Royston Lambert's, Beloved and God: "What happened to him and Antinous and perhaps the whole imperial entourage in these warm September days of preparation, renunciation and revelation, in Athens at the sanctuary of Eleusis some fourteen miles away, was to set the tone of the succeeding journey. It was to precipitate in and around the party and especially within Hadrian himself, a transcendent fervour, a sense of divine purpose and accomplishment, which were to last for some years. The faith and confidence generated by the mysteries, the imagery and deities of the profound myth of Demeter and Persephone, charged Hadrian's actions and imagination not only for the rest of the journey but, to a waning degree, for the rest of his life. Antinous too experienced something powerful and fundamental in and around the sanctuary of Eleusis that autumn, of that we can be sure, something which was in the end to shape and to explain the obscure death on the Nile two years later and all its dramatic consequences."

We will never know what happened within the enormous hall of initiation the telestrion. This huge area seated up to 3000 people. The mysteries were revealed there for two thousand years, perhaps millions of people had witnessed them. A person of either sex, any social status or rank could attend, even slaves. The mysteries must have been so awe-inspiring and deeply beautiful to experience that not one of them broke his or her vow of secrecy about them. There were severe penalties if one did break the oath of secrecy about them. Alcibiades was sentenced to death for just making fun of the chief priest. Pausanias, usually very informative, refused to even describe the area outside of the sanctuary because he feared committing sacrilege.

The images are of remains at Eleusis. Originally I had not intended doing another post about H/A so soon, but I am working on some ideas and thought as I had this completed I would go ahead and post it. Peace and be well to anyone stopping by.
Posted by Devin at 2:23 PM

Hi Devin
Very intriguing - this kind of secrecy always bothers me, I don't see the necessity of it. Over the years so many seem to have received 'divine' information, yet mankind never seems to have benefited & things always seem to have progressed much as they ever have.

I am so glad you did wise! you have helped me so very much and I am delighted if I could be of help to you-Best to you and yours always!ps you are certainly correct about 'secret information'-maybe we will have more thoughts on this-interesting view I did not think of this as I was putting down post.