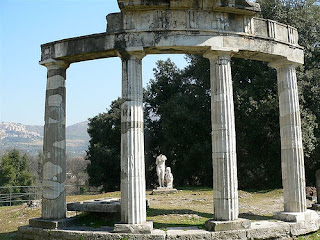 At whatever point in Hadrian's life that Antinous entered into it, there is one thing in our story of so many 'maybes' we can be absolutely sure of. This was not the relationship between a lust filled, dirty old man and a stupid, effete catamite. Was their relationship sexual? This we will never know with 100 percent certainty, but I certainly believe it most likely was. There were no viewpoints in most of the Greco-Roman world of the time that sexual relations between an older man and a younger man was something to be viewed with disgust. In fact what we would think of as pederasty today, became by classical times in Greece, a social institution. The older male lover (erastes) aged between 20 to 40 years old was expected to give the younger male (eromenos) aged between 12 to 18, not only affection, but oversee the development of his mind, morals and body. Also the erastes was expected to train the eromenos in customs and civic responsibilities. This institution was regulated by law and tradition. Again, from Royston Lambert's, Beloved and God: "In the leisured Greek family of classical times, the role of women was strictly limited, children were reared by slaves and the father was absorbed by affairs of his city. There seems to have been an emotional void in the relations of the conjugal pair and between fathers and sons. Though the boys went to schools, these were despised as mere places for narrow instruction rather than for any broader education."

For whatever reason the practice flourished, by the time of Hadrian it had changed very little from the 500 years preceeding him. It should be noted that the Romans themselves did not take to the practice at all like the Greeks did. The family in Rome was a very important institution and was the foundation and the most cohesive part of Roman society. In political and cultural life in Rome women played a very important part, especially when compared to a woman's status in Greece. The Roman upper-class considered many customs of the Greeks degrading. Bisexuality, however was very common to Latins and the Roman version of the Greek system was the custom of patronage and tutorship. Many young men in Rome climbed the social ladder by becoming the lover of an older man. The Roman version was also much more self-serving and lacked the spritual qualities of the Greek erastes-eromenos ideal.

Homosexuality in Rome was not always viewed with such an accepting attitude. In the days of Julius Caesar homosexuality could be the cause of a political attack, especially if the man being accused was said to have had played the passive role during sexual relations. Julius Caesar himself was said to have had an affair with the previously mentioned last King of Bithynia, Nikomedes IV. In this affair Julius was said to have played the passive role. Bibilus called him 'the Queen of Bithynia' and Curio depicted Julius Caesar as 'every woman's man and every man's woman'. Caesar's troops were apparently not offended by this at all and when marching in triumph through Rome sang happily 'all the Gauls did Caesar vanquish but Nikomedes vanquished him'. How times have changed-can you imagine twentieth century troops singing something like this about General Patton or Marshall Zhukov? Overall it seems to me that although Greece didn't equal Rome regarding the issue of sexuality and many other cultural, social and political norms the Romans did copy Greek ways in a lot of ways, but with a much more down to earth attitude. Note to reader-if this series is new to you and you would enjoy learning more about Greco-Roman history, the ways in which Greek and Roman cultures both clashed and harmonized at times and the views they had of each other are a fascinating area of study in and of itself.

From Beloved and God: "Against this background of unrestrained sexual indulgence, there did grow up in cultivated Roman circles a more genuine pederasty with a culture modelled on Greek precedents. Symonds' remark 'that instead of love lust was the deity of the boy-lover on the shores of the Tiber' is by no means always true. Many middle-aged men had their boy-lovers (called pueri delicati or paidika) whom they nurtured with the same passionate tenderness no doubt accompanied by physical love of the ancient erastes for his eromenos. No couples could have shown more solicitude than the wealthy barrister Flavius Ursus and his fifteen year old boy, or Melior and the young lad Glaucias whom he had freed and adopted as his own. Both these boys died young and their lovers' grief is expressed by poems by Statius which despite stilted imagery, vibrate with a genuine lamentation which must have been similar to Hadrian's for Antinous. Martial too could refine his coarse interests to exquisiteness when writing of the deaths of boy-lovers. In a tradition more like that of heroic Greece, we find Julius Alexander, being pursued by assassins sent by the Emperor Commodus in 189, opting instead of an easy escape alone, to stay with his exhausted boy-lover and to die with him."

As we can see Hadrian's relationship with Antinous was not without precedent and the cultural background of their relationship was well established. Dear reader, as a gay man I found the Hadrian and Antinous story very beautiful. However this post was very hard to write as I did not want to be mis-read as promoting a return to the ideals of ancient Greece. This part of the story is about something that just was and it would have been very intellectually dishonest for me to have left it out as it is very important to this series. Peace and be well to anyone who stops by. The image is that of the remains of Hadrian's temple to Venus at the Villa Adriana.
Posted by Devin at 2:51 PM