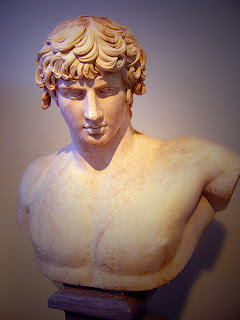 Returning to our story and Royston Lambert's, Beloved and God: " 'He fell into the Nile'. Such is Hadrian's own written account of the death of Antinous-at least as it has come down to us in the abbreviation of Dio Cassius' history. Even if the Emperor's original words, in a letter of his autobiography, were more profuse, they evidently satisfied no one at the time and the telegrammatic brevity of what we now read has satisifed no one since. Hadrian's laconic and vague words merely describe, they do not explain. How, we immediately ask did Antinous fall? And why?-by accident or design? Hadrian's phrase is almost dismissively abrupt; as though he was testily repudiating other explanations being proferred by contemporary gossip without giving anything away himself. From this, the suspicion has always lingered that Hadrian knew more than he was prepared to tell. Perhaps, however, he knew less than posterity is inclined to assume. His few words may reflect nothing more than his own scanty information. Antinous' last moments may have been as much a mystery to him as they remain to us."

Now, as this series heads into the home stretch I would like to make known what some ancient and perhaps modern historians have believed or disbelieved about the death of Antinous and will tell you what I think happened and also what I believe Royston Lambert believed-at least the way I am reading him. I will use both my own words and Beloved and God at the end of this post. We are still not quite finished with the series and I definitely want to get to all questions asked by commenters. Theory number one seems to have been that there was a court conspiracy against Antinous-maybe involving Sabina or perhaps Commodus acting together or alone. I do not think this is what happened although we will never know. The reason being is that there was no need to get rid of Antinous, especially as a mechanism for keeping the imperial throne. The star of Commodus was already rising fast and Antinous could not have gained the throne even if he had desired it, which I think is extremely doubtful. Sabina and Antinous may have even got along just fine, thinking especially of the earlier days of Hadrian's reign. They had both been subjected to the emperor's whims-on the surface of things Antinous came out much better than Sabina, but I beg you to look deeper. We will never know, but was the all embracing and perhaps suffocating adoration of Hadrian that much to be treasured by a very young man, who as I think the previous posts show, could more than think for himself and fend for himself.

Theory number two is that Antinous died during a voluntary castration performed in order to save the qualities that so endeared him to Hadrian. I think we can chuck this one out the window too. First of all would Hadrian have subjected his beloved to that barbaric practice? Thinking back over the previous posts and the research I have done I think this is very unlikely-with a probability of maybe 0.0005 percent! Hadrian had extended the ban of castration begun by Domitian and even extended it to circumcision. Secondly, why would he have waited so late to do the procedure as it was most likely too late to affect Antinous' appearance by now.


Theory number three is that Antinous simply fell accidentally into the Nile or drowned on an outing on a papyrus skiff. There is absolutely no evidence for or against this theory that could throw it into the dustbin for all eternity. Think about it for a moment though, with everything that was going on in the background. Would a religion that could compete with early Christianity have started with something as simple as an ooops or in the words of Scooby Doo, ruh roh!? Who knows? I do not like this one and think there is a better explanation. Certainly accidents in history do happen and to me anyway seem to have an effect on very major events, but stay with me.


Theory number four is of a forced procedure called hierougethesis, whereby Antinous would have been sacrificed and his entrails inspected-extispicium, to determine Hadrian's future. Hadrian did have occult leanings. There is absolutely no evidence for this and think again-would he really have subjected his beloved to this horrifying ordeal even with Antinous' ok? Remember just a matter of weeks before Hadrian had put his own life on the line to save Antinous with the situation with the great lion in Libya. There is no historical evidence to support that Hadrian's fear for his own life or reign superseded that of his love for Antinous at this point.

Here is what I think happened that day or eve in October 130 AD and I think Royston Lambert and others were or are thinking along the same lines so it is not just an unemployed, homosexual peasant with minimal education who always tends to think along romantic lines and has a tendency for hero and heroine worship. I think Antinous was looking at the future and any possible role he might have once Hadrian passed from the scene. I think he found this future wanting. I think the many stories of death, resurrection and subsequent deity had affected his mind, at the very least since participating in the Eleusinian Mysteries. I do not think that Antinous was vain in any way-an incredible accomplishment with all that had been thrown his way. I believe the sometimes overwhelming stress he had to be under-both from his relationship with Hadrian and thinking about future potential enemies and possibilites maybe coalesced in his mind during those final weeks. I think Antinous did actually love Hadrian in some way-maybe hugely and realized his life would have been much different had Hadrian never crossed his path. This story has tugged hugely at my romantic and idealistic heartstrings and not just because it is a quote unquote 'gay' story. I have found 'straight' romantic stories from history and even platonic and Sapphic love stories almost equally endearing. I can't possibly go into these in the scope of this post. I think Antinous voluntarily gave himself to the Nile-definitely to help his beloved, Hadrian. Antinous also may have done this because he was thinking not vainly of being a god, but to truely be able to walk through the veils of life and death.

Once again from Beloved and God: "Though this explanation of a sacrificial death most comfortably fits the facts, the mood and the traditions of the time and place, subsequent events and the psychological probabilities, Antinous' death must always remain a mystery, and the faint possibility that it was an accident after all can never be completely obliterated. It must have been as much a mystery at the time. It is likely that no one, including Hadrian himself, fully saw and knew all that transpired in the final moments. Perhaps Antinous, along with Hadrian and others, heard the advice and admonitions of the magicians of the temple and brooded on their implications. Then the young man disappeared. Later his body was found in the river near the township where Bes was worshipped. The Emperor, his jabbering courtiers and bemused posterity were left to deduce what had happened."
The image is of a bust of Antinous from Greece at the National Archaeological museum of Athens.
Posted by Devin at 7:53 PM

A fine finish to a fine series.

wise, again I cant tell you how much I appreciate your thoughts here-if you are thinking of doing a post along these lines at some point I would love to see it! It is so funny how the web 'synchs' peoples thoughts together-I notice you and I are on the same 'channel' a lot in regards to these historical reverberations and other things-just the fact that both you and Middle Ditch commented here today along both of these different-yet 'same' subjects has given me the courage to start-albeit very slowly with 'my' story of the Dej-Pauker feelings-again it will probably have no nice 'ending' you can put in a box and gift wrap-the investigation has barely started-i just can't deny anymore that my site would be a good place to tell my thoughts on my own reincarnation story-if that is indeed what it is! As to your comment on this particular subject-I think with someone who is intuitional as you-that you should take the feelings you have about these wherever they lead-if I can be of any help I would love to try-this is doubtful as I am so used to denying my intuition. Best to you as always-I hope you and your family are doing wonderfully-if anything comes to me at all I will post at your place-already have one under 'twinsel town' that I am going to see if you have there!

(1) In his letters to Pliny the Younger, we can see that HAdrian was normally abrupt in his written communications. I wouldn't necessarily read too much into that, other than perhaps a hint of a general personality trait. I would suspect he was heartbroken, and possibly self-accusatory if he beleived Antonius really commited suicide.

(3) Unfortunately, there is no evidence extant, and this is one of the frustrations about speculative writing. I agree with you that some of the dynamics of this voyage seem unusual to me, but we would almost ahve to leave off any conclusion as suspicion.

(4) As a student of the classics, I have really enjoyed this series, and the feelings behind it. Well done.

Hi X I am so glad to see you here this am-your knowledge of this era is priceless for this series-perhaps if hadrian was always abrupt Mr Lambert read too much into the brevity(me also) definitely agree about Hadrians grief being real-although i still have thoughts that Hadrian was more into the phenomenom of 'his' love for Antinous -he obviously cared for him on a very deep level-he put his own life on the line for him-perhaps it could be a mix of both with guilt mixed in? It is very frustrating at times not knowing absolutely what happened that day on the Nile-i myself delight in mysteries but i would love for something to surface that would prove as much as possible what did indeed happen-very very unlikely-thanks so much for the info in 2!-unimaginable for me also! I can't tell you how much I appreciate your thoughts in 4! I have a very hard time not thinking 'romantically' and a hard time thinking sequentially-I was so afraid mania and ocd would ruin this series-your comment really touched my heart! best to you as always!