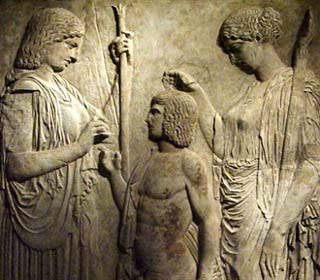 Eleusis provided the backdrop for one of the most ancient myths. Persephone, or Kore, the daughter of Demeter the goddess of the earth had been kidnapped and taken to Hades, the kingdom of death, or underworld, to be the wife its ruler Pluto. Demeter, also a mother archetype, was very sorrowful at the loss of her daughter and renounced the pleasures of Olympus. Demeter roamed the world, grieving and looking for her daughter, in her sorrow she brought an eternal winter to the earth. Demeter took refuge in the palace of the king of Eleusis, Keleos and as a mark of gratitude she built a temple there. Zeus ordered that Persephone be returned because mankind would become extinct without food and so that Demeter would also return to Olympus. Before Demeter returned she instructed the kings of Eleusis, Keleos, Teleos and Triptolemus about how to celebrate her rites in her temple. This was to become the Eleusinian Mysteries. Through the devotion of her mother Persephone had triumphed over death, an early example of resurrection and renewal. Persephone came to personify the seasons, as from this point on she would spend two-thirds of her life upon the earth and on-third in Hades with Pluto.

From Royston Lambert's, Beloved and God: "The mysteries of Eleusis were a bridge between the old and the new religions. Unlike the eastern faiths, this cult was not monotheistic nor totalitarian in its claims. It did not impose control over its initiates by strict codes of morals and practice supervised by a non-secular priesthood organized into an extensive Church. Like them,
however, it did provide impressive ceremonies and initiations necessitating total participation of body and soul. It did offer through a sustained union with the tribulations and triumphs of its goddesses, a transcendence over the pain, problems and status of the world, and sustenance in a common brotherhood of faith."

Again in our story, there isn't one hundred percent proof that Antinous took part in the mysteries. Most historians believe he did, and knowing the depth of his relationship to Hadrian I can't imagine him not being there, maybe standing very close to Hadrian and Sabina. The ways in which the mysteries may have changed Hadrian and Antinous, especially Antinous are interesting to contemplate in the light of subsequent events.

Dear reader, I hope you enjoyed the latest post involving the story of Hadrian and Antinous. Once again I need to get caught up with how the story will unfold here. Tonight or tomorrow-the universe willing I would like to put up a post about some questions that I think relate to topics about the paranormal and leave it up for two to three days at the top to see if anyone would like to comment or criticize about the hypotheses I would like to talk about. I have kind of a busy week ahead and that would allow me to work on the final stretch of the H/A saga. I have enjoyed immensely talking about this time in history and what may have happened. I had even thought of taking other historical stories and making a series of them-and perhaps I will. However, as much as I have loved doing this I have noticed that getting involved with such a series is preventing me from focussing on the three main things I started MFM for. The three being paranormal questions and studies, poetry I have enjoyed and putting up posts showing my attempts at writing, so I will have to see. One of the things I find interesting is that some paranormal and Fortean studies do cross over into historical studies from the ancient mysteries to the new exploding field of synchromysticism. I would never have had the courage to start MFM without the support of friends who blog about this subject. Peace and be well to anyone passing through!
Posted by Devin at 3:55 PM

X-again I always so appreciate your intelligent and thoughtful comments here-I hope to post a 'short' version of what I think happened to Antinous tonight or tomorrow-however health allows (as bad health really slows my brain cells-this very question will be in that-unfortunately not as a 'known' answer-but perhaps were Antinous first got his intro to occult matters and the last parts which I think are critical to my thesis. Best to you as always! I do hope you will be getting some downtime soon-esp to be with friends and fam over the holidays-worry that you work a lot! I would absolutely love to see you do the Franklin case-you are one out of 2 bloggers that I know of who could take this on-and I would much rather you do it because you bring 'all' aspects of a case into the spotlight which I think is very very important. Best to you as always!