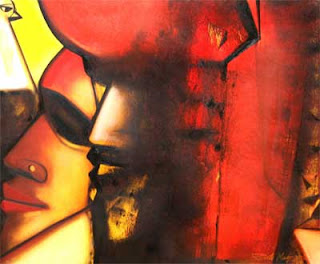 In a small set of posts, I would like to talk about the case of Iris Farczady. I happened across the story last year and thought it was intriguing. It involves a lot of paranormal and esoteric questions, religious philosophy also and I thought the story was interesting in its own right. I had wanted to do some posts about paranormal phenomena here at MFM and thought this one would be a great one to start with. Iris Farczady was born in Budapest in 1918. She became known by another name; Lucia Altarez de Salvio. The story of how she came to be known by a different name is what I find so interesting. Iris was born in an upper class family. She had a normal life growing up. She did well in school, especially in the study of languages and mathematics. There was a bit of the unconventional in her families background however, and she also excelled in another area-that of trance mediumship.

Before Iris turned 15 years old she was taking part in a seance, apparently led by her mother. Many different types of 'spirits' spoke through her as she was in a trance. Some of the supposed discarnate entities claimed to be from other planets and some spoke different languages. These entities-whatever they were didn't leave sometimes when the seance was over. Some of them stayed around for days. In an interesting note as to what follows later in the story, some of the 'spirits' begged to be released from the body and mind of Iris.

In 1933 an entity invaded Iris, this one showed no signs of ever wanting to leave. Iris' mother was very distressed about this, but assumed like the other 'spirits' had, it would eventually go away. Mrs. Farczady could not have been more wrong. The spirit said her name was Lucia Altarez de Salvio. Lucia claimed to have died three months prior to the possession in 1933. She said she had been a working class woman from Madrid and had 14 children (she later claimed 15). Lucia also claimed to have been a believer in communism. Lucia knew a lot about Madrid's churches and the saints they were named after. Many years later in an interview done in April 1998 with the Society for Psychical Research (SPR), she could still recite the Lord's prayer in Spanish. One of the particpants in the interview was Titus Rivas an author and researcher from the Netherlands, whose native tongue is Spanish. Rivas claimed that it would not have been unusual at all for Spanish communists to have Catholic sympathies. They identified with the zeal and the suffering of the early Christians, much like believers in 'liberation theology' do these days, especially in Latin America.

I do not think this series is going to be very long at all -I just thought it was an interesting story and would be a good one to put in between the Hadrian/Antinous series in addition to the poetry and my attempts at writing. I expect the H/A saga to go on for a bit more and hope to have the next part of that series here early tomorrow evening.

The picture is called "Duality" by Paresh Maity-2005

Hi Devin
That reminded me of a book I read sometime ago called Remarkable Healings by Shakuntalah Modi - a psychiatrist who stumbled onto cases of possession that were causing all sorts of problems in her patients. If I remember correctly there could be several entities within any one person & that it was very common indeed & could often explain health problems - often the entities were people who had been close during life or who had somehow got pulled into the body of someone & then been trapped. I've found a little write-up if you are interested - just scroll down until you get to 'Possessions & attachments' - certainly some very interesting ideas.

All the best to you

Thanks once again for stopping ny wise-I shouldn't even be up this late as I have to get up early tomorrow-funny thing is I was so tired earlier. I will go to the link you provided-I so appreciate yours and Michaels, x.dells and others support here! This case is another of those things that have very many different answers-but I found it interesting-I was wondering-do you and perhaps Michael and Xdell-other folks too if they stop by-do you think I am to all over the place here? I wonder if I should narrow down the stuff I cover-the blog really was just a place for me to say I exist-hehe-but if I can find people that like this blog I want to keep them
I added the widget thingy because I have seen it on other sites and think it is so cool on an active site to watch flags of other nations as they come and go-a friend at RI gave me the Finland flag! Best to you as always and I appreciate and take to heart all of your comments here!
maybe I can get aferris to give me the Czech flag (wink)
and thanks again for the link-this is central to this small story!

thanks for checking out my blog, and feel free to include h2o + soul in your blogroll if you want. i hope you´re well.

Wowza! That was REALLY cool! for lack of a better term. I always wondered about spirit possession and mediumship, but I was told by a medium that you have to "allow yourself" to be open to them, then they can take possession. Much like wondering about O.B.E.'s I never allowed myself to be open to spiritual possession, though the thought has intrigued me.

This also makes me wonder how close the vibrational frequency is to the ether/aetheric plane now! This also syncs well with me today as I was pondering mediumship while eating lunch, now I come here and read this! Sync wink again for me today.

I think that of all the powerful spirit mediums out there, and the one I visited, they all seem to revolve around the basis of "people must have faith", they never say in what. I have a gut feeling the spirit world is not much different than this one, as they do not have answers there either, its just another step in the evolutionary rung.

Keep up the eclectic work!
Be well.
Oh, I also like the term "healthy self" because broken down it is "heal thy self". Wise taught me that one!

Michael I always love it when you stop by!-wise woman and everyone else also-I amy have some thoughts to add in this comment section about this or maybe will wait til next post-I hope to stop by my favorite synchro places and other blogs-I do have a large (for me-hehe as I am such a poor typist-about H/A-I am trying to get ready to post-the next H/A is already done done too-but I want to do just one or two things before-so hopefully if connection holds I will be around later! Peace and be well and thanks so much for your support here!

Jackson-thanks so much-I love your blog and can't wait to look at it some more this evening if all goes well!
Peace and be well!

Hi Devin
I think blogs can have a life of their own - if it feels good post it - IMO
Personally I just go wherever the feel takes me, which is all over the place - it's like I'm working hand-in-hand with my intuitive self, no logic involved - it's the most creative that I feel in life these days. Hope that helps :)