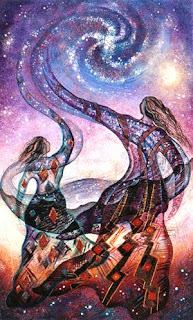 The story of Iris/Lucia was not widely known in the english speaking world until 1951, when Cornelius Tabori published an account of his 1935 visit with the Farczadys. Tabori described them as "a decent middle class family." Iris's mother told him, "You're looking for Iris? Iris is dead. She left us in August 1933. Where is she? Only God knows. Iris has disappeared. She who lives with us now is called Lucia, a woman from Madrid." Lucia confirmed this to Tabori in " a heavily accented German." She also wrote her full Spanish name in Tabori's notebook. Lucia's handwriting was very different from Iris's precise script-Lucia's script was like that of a child. Tabori asked Lucia to sing a Spanish song and was given about half a dozen performances, with Lucia singing and dancing like a real Spaniard.

Iris's sister told Mr. Tabori that she had taught Lucia German and how to read and write. Iris's father told Tabori that Lucia was a wonderful cook and made "extraordinary dishes." After his visit Tabori concluded, "There is no easy explanation, no easy solution." Tabori also mused, "Are they pretending? But why? Perhaps a psychologist could explain the matter."

The interest in the Iris/Lucia case might have ended, had a string of chance encounters had not happpened between three members of the Society for Psychical Research, SPR. The three people, the previously mentioned Titus Rivas an author and researcher; a retired solicitor from the United Kingdom, Mary Rose Barrington and Austrian psychology lecturer Peter Mulacz. The three had been pursuing their own independent investigations of the case, not knowing of the other interested people. This changed when they attended the 1997 SPR conference and in one of those curious synchronicities that happen in the study of the paranormal, they learned of each others interest in the case during a coffee break! On April 3 1998, a day before Lucia's 80th birthday, the three researchers went to Iris's home in Gyal which was a short drive from Budapest. The researchers brought a bouquet of birthday flowers with them.

The researchers conducted two long videotaped and multilingual sessions with her. Lucia was delighted to be able to talk to Rivas whose native language was Spanish. She referred to Rivas as her hijito(little son), and hugged him affectionately before they left with a very authentic Spanish abrazo. Lucia struck Rivas as an authentic Spanish woman and considered her understanding of the language to be "very near 100 percent." During the course of the interview with the 3 researchers Lucia convinced them that she had no memories of her life as Iris from 1918 to 1933, her memories as Lucia from the previous 65 years were very clear. Lucia recalled her dancing years for the trio and told them with pride that her dancing style had been admired. She proudly recalled the names of the nightclubs she had performed in, mentioning one, the Arizona, and its owner 'Frau Arizona' as this woman had indeed been known.

Lucia talked about surviving World War 2 and how she had at first welcomed the arrival of communism in Hungary. This is very interesting to me, as when Lucia first took over the mind of Iris she had mentioned being a believer in communism. Lucia told the 3 investigators that she eventually became disillusioned with communism and came to see Stalin as "an evil man." Very interesting to me also was the fact that she mentioned Primo de Rivera (dictator of Spain from 1923 to 1930) saying, "We communists hated him." Lucia's recollection of Rivera was fascinating to me because he would have been the dictator of Spain during the years she had supposedly been alive in Madrid, before passing away in 1933 and taking over Iris. I thought to myself-could an eighty year old woman, who to some might be 'faking it', have remembered to add a detail like this?

Lucia still remembered other fragments of her previous life in Spain. She remembered being an analfabeta (illiterate) and a man used to write letters for her. She also had memories of working as a lavendera (washerwoman) and a criada (housemaid). She had married a nice bricklayer named Pedro when she was in her early teens. She claimed to have had 15 children with him, although earlier had claimed 14. She also remembered going to gypsy healers when she was sick and called them las tias (the aunts), as such healers were really known in the Madrid of her time.

I hope you have enjoyed this little set of posts about Lucia/Iris-we are almost to the end of the story with them. I think this case brings up very interesting metaphysical questions and when the final post is ready I would like to bring them up at the end and see if any would like to comment about them or if they see any I have missed.
Posted by Devin at 7:31 PM

This is a person I've never heard of before. There are some interesting things here. My take on this is rather mundane, but it seems the seance was similar to iatrogenic treatments that researchers feel are at the heart of Disassociative Identity Disorder (DID--what used to be called Multiple Personality Disorder, or MPD).

I'm wondering if someone tried to find records of a Lucia she might have been.

That is the subject of the next post-hopefully here tomorrow-monday at the latest unless soemthing happens-if I have major connection problems I will inform readers as soon as I can from my parents computer or library.
Love seeing you here I know you are very busy!

xdell if you come back-do you know-i know this is an odd question- of any bloggers-either english or russian-i would prefer russian that i can contact to see if they would like to link to me-if they blog along the lines of russian history-poetry-literature-and cultural things?
best to you!-Devin