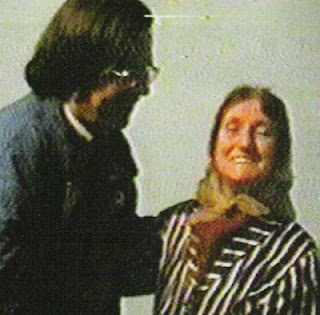 The case of Iris Farczady has been so interesting to me on so many different levels. The questions of what really did happen to her and why being the most. Lucia told the three hard working investigators (when this post is finished I will try to post a link to their site), that she never had the intention of taking over Iris's mind and appeared to be emotionally upset by the question, maybe thinking that people would think she did this with intention to inhabit the body of a pretty, intelligent young woman from a well to do family. Lucia said she had no will towards coming back to earth. She did remember a small bit about the time before she began inhabiting Iris, she said she was "floating happily in space like a small boat on water." Suddenly, with no clue as to how it had happened she found herself in Iris's body.

The SPR team was satisifed that there was no question Iris/Lucia was trying to perpetrate a fraud and began the next steps of doing all they could possibly think to do to find a trace of the past Lucia had mentioned in Madrid. They put out an appeal for information in a popular Spanish magazine, Mas Alla. They wrote letters to every Altarez or Salvio they could find in telephone directories and as these are not typical Spanish names, they also sent off letters to the somewhat more common Altares and Salvo names they could find. The team did a search that had been previously done in 2002 in the archives for birth and death records in Madrid. The teams search included the names of children Lucia had mentioned as being hers. The three investigators unfortunately came up empty handed-I say this not only because it is such an interesting case but they put such a huge amount of hard work into their efforts. The team of Mary Rose Barrinton, Titus Rivas and Peter Mulacz had tried to do everything they could possibly do to find any trace of a past for Lucia. The team's conclusions on the case vary a bit but I think the words of Peter Mulacz sum up their thoughts on it the best, "My conclusion is that the case is truly inexplicable, and remains an enigma."

So we are left with a host of fascinating and intriguing possibilties. Was this a case of psychological dissociation? A case of multiple personality disorder? Xenoglossy combined with cryptomnesia? I find these explanations for this case-although they are also interesting, too simple. You can come up with your own conclusions about this case of course and I hope anyone passing through MFM will comment if they have any thoughts on the case. For me Iris's mastery of the Spanish language in the local Madrilene dialect, even though she had possessed a gift for languages was too precise. Her mastery of the style of dance she performed, the Flamenco, is an extremely hard one to learn and can't be learned by just watching it performed.
Iris/Lucia had mentioned the name of a street, Calle de Lista which has now been changed to calle Ortega y Gasset that was unlikely to have been listed in any travel brochures and books and other information available to a young woman in 1930's Budapest,as this was the era long before the internet where one can find incredible amounts of information in a very short amount of time. Iris as Lucia had also made the las tias references were also unlikely to have been known without having direct information about Spain and Madrid. When she spoke of the gypsy healers she spoke exactly how a Spaniard from Madrid would speak about them; using the way Spanish people have of referring to people not related as relatives, as stated before las tias means 'the aunts'. Iris as Lucia simply knew too much information about Madrid and Spain to have been learned from travel books, encyclopedias, novels and the like. For me her knowledge of the language, mastery of her dancing style, knowledge of local customs and information she gave about the era in Madrid she claimed to have lived in was too concise and time specific in some areas-not all- to not in some way, to have had direct contact with someone or something
in and from that era.

That leaves me with a choice of post-natal reincarnation-which is what Lucia claimed it to be or spirit possession combined with xenoglossy. Of the two I simply can't decide-both are extremely interesting to me and lead me to question and maybe some of you to question cherished belief systems and models of reality. I am paraphrasing and I hope not making too much of a hash of what aferrismoon, one of the synchromystic bloggers I link to said in the comments section of wise woman's beautiful (all of her posts are beautiful and thought provoking to me) new post at too long in this place 'no one has decided what a human being really is'.
In this line of thought I would also suggest reading Jeff's post on 30 January 2007 at Rigorous Intuition-"Are You Being Served?", with Jeff Wells as with so many bloggers I link to-it is hard to name a favorite post, but I really loved this one. This ends my series on Iris/Lucia unless any new information comes up but I hope to be discussing many of the paranormal and esoteric questions and others here that this case brings up. This information came from the link I am going to try to provide, other sources on the web, and Guy Lyon Playfair's fantastic article in the April 2007 edition of Fortean Times magazine. I am still behind on the H/A series-I was hoping for a very productive day today, but insomnia and loud neighbors at night have prevented this. I will keep trying to have new things here at MFM whatever happens with some sort of frequency as long as net connection stays up. Peace and be well and remember always try to question the 'history', 'belief systems' and other things the Powers That Be try to shove down our throats in their attempts to mold our 'reality' for us to suit their needs! Oh-the picture is of Titus Rivas with Iris, of course now as Lucia in 1998.
The Links- http://www.psican.org/alpha/index.php?/20080808103/Ghosts-Hauntings/Possession-Or-Transformation.html
http://members.lycos.nl/irislucia/onepiece.html
Posted by Devin at 3:45 PM

This is an interesting concept. I will respond fully to this a little later. However, just wanted to leave you a comment and tell you that you should continue writing about this kind of stuff. Thanks!

Hi Devin
A most interesting case.

Because I read a book some time ago about entites sharing living bodies, I have no problem seeing the likliehood of that in this case. Science has ignored the unexplainable for years, yet possession was an accepted idea in many cultures.
Hollywood allows only one type of possession - something dark & nasty. What if there are a whole range of possibilities. The author I read suggested much illness may come from the entities inhabiting living people.

We've been taught to rely on our eyes which see only a very little & to ignore our feelings & intuition which are often highly gifted.

Hello Leon-I really appreciate your commenting here! Of the work I have seen of yours I give you extremely high marks for-the poetry I have seen is wonderful! You really have a gift and I appreciate you sharing it with the world.I will indeed be doing more of these types of articles-the universe willing after I finsish(or try to finish) I should say the H/A series. Best to you always-and I can't wait to read more of your work-Devin (ps it gives me so much hope for the future that people in their twenties like you and Ben at Pseudo Occult are around)

wise, as always I am so very happy to see you! I have read (don't know if it is about the same case)books and articles suggesting possession) I really like your thoughts about the range of possibilities of possession-what if we can be momentarily taken over by something good? I could sure as heck use being taken over by a muse to finish H/A instead of relying so much on the departed Royston Lambert for my words-if he ever authored anything else-even if it was about underwater basket weaving-I would read it! We really do need to rely more on intuition get rid of the 'logic bleach'-speaking of talent with words wise, I think you would make a brilliant author or poet. Blessings as always from AZ to NZ!-Devin