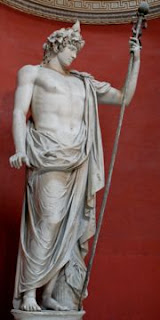 Once again we go to Royston Lambert's, Beloved and God: "But the incredulous local folk seemed to have such an affection for another god, Bes, that they 'exceptionally frequently' incorporated his name with their own, as in 'Besamon', and thereby misled later historians into thinking that that the place itself was called 'Besa'. Now Bes was a god particularly adept at warding off danger, the god to whom the poor fellahin frequently turned to for protection. By a strange coincidence, this god's name, and therefore his unlikely place on the Nile, connected with Hadrian and his beloved Athens. For it was in a deme called 'Besa' that Hadrian had been enrolled when made a citizen of Athens twenty years before. This district had been specially incorporated into the new phyle of 'Hadrian' created in 124-5 in the Emperor's honor in Athens."


Could the synchronicity in Hadrian's life of Bes, the god who warned about danger and Besa the deme of Hadrian come together in a kind of dance in the minds of both Hadrian and Antinous? Were the two minds and lives so meshed inside the web of fate thinking some of the same things and coming to the same or differing conclusions? Did someone else in the imperial entourage not have the best interests of Antinous in mind-maybe even hating him so badly the person wished him dead? Also along this line of thinking, maybe someone didn't really have anything against Antinous personally but perhaps thought a 'sacrifice' was in order to save Hadrian? Did the many tales of death and resurrection and subsequent godhood have an effect on the mind of a young man who must have had many thoughts about his future running through his psyche? We will never know exactly what happened on the Nile in that last week of October 130 AD. It was in this strange and obscure place that the swirling waters of the Nile took Antinous to his death.
The image is of a statue of Antinous as a god in the Museo Clementino in Italy. Dear reader I never dreamed I would do so many posts about the same subject all in such a short amount of time. My mind has a tendency to wander from subject to subject as I am interested in so many things. I felt an 'intuition' to do these posts this way and for once listened to my intuition. Originally my feelings and my feelings only about what happened on the Nile and a poem to go with it were going to be the end of this series. I will think about maybe continuing a bit into the subsequent years of Hadrian's reign and Antinous' deification. Normally here at MFM I would like to break things up much more-what can I say-the 'universe' told me to do this part this way.
So hopefully after coming back very soon to do the poem and the version of history that I think happened-everyone can come to their own conclusions, I will start doing MFM the way I had originally wanted to. I kind of laugh at myself-but it is a good laugh for thinking this was going to be 6-8 posts-I had even thought of going for an apostolic or judicial twelve. This series only ever came into being because of Beloved and God. Now that Jeff Wells new book Rigorous Intuition is on its way to me through the kindness of my brother, my new mission is to order Royston Lambert's book some way so I can have a copy for myself and not on loan from the library. In a ten star rating system, I would give Beloved and God a fifteen! What can I say-just an exquisite and to me priceless to the soul to read book. Peace and be well to anyone stopping or passing through!
Posted by Devin at 7:06 PM

Hi Devin
I have learned (hopefully for good), that I'm not in charge when it comes to writing - it is somehow a two way crafting that goes in the direction & duration that it needs - it will not be coerced! I feel your creativity in this post just the same as I feel when I write - you may as well give up at the start & let it have his or her way - it's worth it because something quite wonderful can be created.

I look forward to your feelings on what happened to Antinous. Also very interesting that we should both think of Heath Ledger!

I know what you mean wise-I have so loved doing this series-but the way I usually do things it would have been much more broken up in between with other things and more spaced out in time. Something inside just said-do it this way-and for once I listened! As always I love it when you stop by-it is interesting how we synch together on so many things- Heath's tragic death was the thing that kept creeping into my mind as one of the what ifs? of this story! This series just seemed to take a life of its own and I couldn't stop-now at least-even though I may continue on with some parts-and also maybe will do other history type posts if I think people will be interested and it won't take all my time away from what I originally started MFM for. Best to you as always and thanks so much again for your thoughtful and thought provoking comments here!

Another interesting read. I'm learning all the way.

Thanks for all your lovely comments. It was a joy reading them.

We are recording this Sunday and the next episode online will be a Christmas special. We only thought about it last Friday. David and I began writing it immediately once we knew the plot. Just a few re-writes here and there and I can print it out.

It will be a total surprise for the cast though as they are prepared to record four episodes only and I really hope that they are okay with it.

David, Monique and all the rest at Middle Ditch I can't wait to hear the next episode! Thanks so much for stopping by MFM! I had hoped to have the rest here tonight to kind of 'finish' this part of the H/A series-also trying to think of anything else along these lines I can do here that people will enjoy that wont take away from what I started MFM for-so in the sense that words are not finding me tonight I will probably ponder a bit-hope to have the last thoughts about H/A here very soon along with other things. I hope to catch up more at MD tonight-love all of yours creativity!

Hi Devin. This has been a great series! I wonder if the Nile flowed again after the drowning of Antinous? It would be weeping...?

Michael-so very glad to see you here! I will once again try to add your blog today-after accidentally deleting my whole list last night it wouldnt let me. A fantastic question and a beautiful way of putting things-I will look into and hopefully have a post tonight that will answer this. Best to you as always!