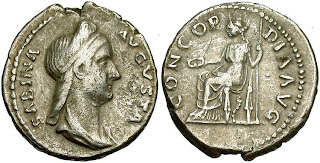 The imperial voyage along the Nile, with the flood waters so deficient and the locals becoming anxious must have had some must have had some effect on its members. One wonders if the omens seemed particularly bad to Hadrian, who for so long had a deep interest in the spiritual and the occult. The people of Egypt held Hadrian responsible for their plight. This was because Hadrian, was also Pharaoh in this land, the god who symbolized the fertility of the earth and had powers over the rising of the Nile. In the past, Egyptians could turn their anger upon the Prefect installed by Rome. Now, however, the Pharaoh was in their midst. In the past Hadrian had played the roles of saviour and benefactor. A bad harvest in Egypt could have terrible implications not only for the already overburdened peasantry but for other cities in the Empire and for Hadrian himself. Balbilla, the scholars of Museion, temple priests and magicians, whom the esoterically inclined Hadrian must have consulted may have told him how in the distant past such a crisis was dealt with.
From Beloved and God: In remote prehistoric times the Pharaoh himself had to be sacrificed to induce the waters to rise, though later a human or animal sacrifice had been used in substitution. An oracle, so tradition went, had instructed the Pharaoh Aegyptus to sacrifice his daughter to stop famine and bring fertility. Having done so the Pharaoh hurled himself into the river, doubly to appease the giver of plenty. There was another tradition of a gaily dressed young virgin being thrown to the river as its bride to secure a plentiful inundation. In Alexandria as late as 410 AD people still talked about the times when boys by pure parents were also offered to the Nile in sacrifice by its priests on the occasion of the great popular celebration of its flood, the Neilia, on 22 October. Indeed the sacrifice of a boy to placate the angry river was to persist down to modern times. Perhaps Antinous heard and brooded on such tales as the Emperor and his advisers discussed desperate expedients to avoid impending calamity."
The two themes of death and immortality had been with the imperial party on its journey since Eleusis. Perhaps Antinous had also heard of the legend of Osiris. In that legend Osiris' death had occurred in the same month the journey was now in, October. The enemies of Osiris had dismembered his body and scattered the remains in the river Nile. Osiris returned in triumph however. His victory over death brought fertility to the land and the vision of immortality to its people. From the Egyptian Book of the Dead: "Life springs up to us from his destruction, the soul liveth again." Indeed the holy Nile brought immortality and sanctity not just to Osiris, but to all mortals who drowned in it, men women and children included. People of all ages, rank and status were venerated in shrines and temples dedicated to them along the Nile's shores.
The image is of a Roman coin picturing Sabina as Augusta.
Posted by Devin at 5:07 PM