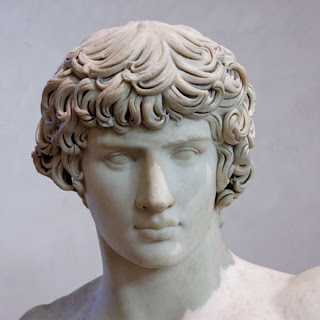 What qualities did Antinous possess that so endeared him to Hadrian? From history we have accounts of him as being vapid, uncultured, stupid and a 'creature of the senses'. There are also accounts of his as being extremely gifted intellectually, a person very learned in philosophy and who had an 'extraordinarily deep spiritual life'. Once again the discrepancies of the views of people writing accounts of him and of course many other subjects are one of the things I find so very intriguing.

From Royston Lambert's, Beloved and God: "Fortunately we have some contemporary evidence to decide the issue. Hadrian himself in the epitaph on the obelisk says categorically and authoritatively that Antinous' 'heart was wise, his intelligence that of a grown man.' Arrian in his analogy which seems to refer to Antinous also speaks of the 'strength of his mind and understanding'. In other words, the lad was not stupid but sage, not retarded but precocious."

Whatever qualities Antinous truly had they must have been enough to keep Hadrian interested in him enough to sustain a relationship that lasted at least two years, but they were most likely involved with each other closer to seven. Many historians believe that the shared mysticism between the two was their strongest bond. I will get into more of this in a later post. The primitive religions of Antinous' homeland, wild yet seductively mysterious may have led the youth towards following cults and gods of ecstasy and participation.

From Beloved and God: "However much we shall stress that Antinous appears the normal variable adolescent, there clearly was a magnetic, positive quality about him which drew Hadrian, impressed contemporaries and still pervades his cold marble images. There is about him an air of innocence surviving experience, of serenity overriding anxiety, devotion overcoming doubt. Not without justice has it been said that in him Hadrian's quest for the absolute was at last fulfilled."

Another quality-and maybe one of the most important ones that Hadrian and Antinous shared was the thrill of the hunt. As a youth Trajan had chastened Hadrian for his overindulgence in the sport. In peaceful times Hadrian had tested his courage and strength by hunting wild animals. Hadrian leaves history with no questions of his skill and bravery. He once killed a huge wild boar with a single blow and there is also the lion he confronted in Libya. This incident we will get to in a later post as it is a very important part of how deep the feelings between Hadrian and Antinous must have ran. Hadrian made sure history was to know of his victories in these hunts. He had inscribed poems, the issue of coins commemorating the gods of the chase, medallions and words etched in stone so future generations could admire him. Some of those emperors, Hadrian included could have used a few lessons in humility I think!

Noting many historical sources, some written and many also of coins, medallions and other artifacts we can see Antinous was very skilled at the hunt too. This has been ignored by some historians, especially those of the early Christian Church,who sought to defame his name. These sources simply assumed an imperial favorite would be effete and not have any qualities of athletic skill and courage.

One more quote from Lambert's exquisite book, Beloved and God, regarding what possibly drew Hadrian and Antinous as close as their mutual participations in the mysteries of Eleusis: "It is scarcely over-imaginative to propose that the relationship between Hadrian and Antinous ripened in this atmosphere of shared danger and excitement, of equality of prowess and endurance, of mutual aid and dependence, of masculine bonhomie, of heroic retrospect and mystical sublimation."

Dear reader-I think I am down to just three more posts for the H/A series-I should have had so much more of this research down and down on paper to transfer here. Please accept my apologies-especially as I have not even begun writing the last three parts (one or two of them may need to be sub-divided into two posts). As I continue my research I will try to have some other things at MFM in between and hope to have the last part of the Iris/Lucia story here very soon. Peace and be well!
Posted by Devin at 3:14 PM

Hi Devin
You have been very busy. I feel like I'm becoming a bit of an expert on Hadrain & Antinous, the only thing is I don't know if I'll ever get the chance to pop it into conversation to show off my knowledge :)

Thanks also for the Iris/Lucia story - quite fascinating. In wiser times I suspect such things would be understood, but unfortunately we only have science & it's afraid of wisdom.

All the best to you.

wise, delighted to see you here! I was just listening to some music to get me tired-I am supposed to be up rather early tomorrow and the sandman is not coming!
I always love it when you stop by MFM-I was at your place today -in some more of your archives-you are incredible!
You are very correct in a lot of things-and what you said about science being afraid of wisdom has been true and it is getting more so every day-I am just hoping that science without wisdom is not going to be the doom of all us someday!
I have been a bit manic lately here and will slow down a bit to get caught up-I still want to post some poetry-possibly tomorrow if nothing prevents me.
Best wishes to you and your family always!

Ahoj - is the most casual of the Czech greetings.
Dobre Rano = Morning, Dobry Den - good day, while dobre odpoledne = afternoon and dobry vecer [ veh-chair] does for evening.
Anyhow I'm not Czech. I ahve to carry some wierd island passport.

(1) I'm going to look into the Iris/Lucia story a bit on my own. You've captured my attention.

(2) Antinous and Hadrian obviously had a strong connection. And historic accounts have their share of sour grapes in them. Those who might have felt put out or envious of the relationship might have cast aspersions on Antinous--especially since it was a lot safer than casting aspersions on the emporer.

XDell-you are so very right about saying anything bad about the emperor! I really do believe that the early fathers of the christian church considered Antinous a threat to the rising star of Jesus-and of course an 'abomination' as to their views of homosexuality!
Peace and best to you-the Lucia information is very easy to find-a very intriguing story if one is into esoteric subjects-and also a story of no easy answers and that tests what a persons subjective or objective views on reality are.
in fact if i can i will try to post a link here.