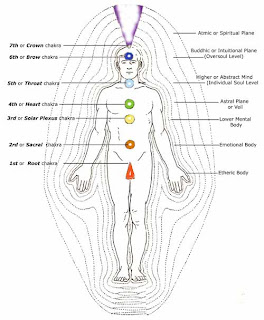 The above image shows how non-physical bodies are related to the chakra system. In this series I think it would be very valuable to talk about certain things even if they only touch on some of the ideas I am trying to develop about reincarnation, where humanity fits in the universe and of course how it relates to my personal story that got me started thinking about some of these ideas. One of the subjects that relates to the theory I am trying to develop is the religious, philosophical and esoteric idea that human beings are composed of not just a physical body, but also of non-physical bodies. In this post I will talk about what is largely thought of as the etheric body and is also known by different names depending on which religion or esoteric system a person follows. In this line of thought the etheric body would be the next one up, so to speak from the physical body. As you move outward from the physical and etheric bodies the next levels are less and less tied to the material universe and higher up on the ladder spiritually. This series is turning out to be very stream of conciousness for me and I hope I am making the ideas I am presenting as clear as I possibly can. Normally I would not think it would be wise to do a long series of posts this way, but again intuition is telling me to go this route. I am definitely going to try to tie all of these thoughts together by the end of the series and I would definitely appreciate any comments or criticisms if I am becoming muddled or unclear to any readers I may have. I can't put into words how much I appreciate the thoughtful and thought provoking comments I receive here at MFM-believe me as far as comments go-you can do no wrong here!


For the purpose of the theory I am trying to develop I will not be going into all of the non-physical bodies and all of the spiritual levels that they are connected to. Like I have stated before I am using the lines of thinking of a very large number of people, religions, philosophies and even science. The etheric body in the ideas I am developing which I think also agrees with the vast number of religions and esoteric thoughts about it, is the body that connects the human physical body to the vital life force. In the Kabbalistic system (here I give a nod and a thanks to one of the many bright people who comment here for this idea), the etheric body would be the sephira Yesod, the foundation. In the ideas I am thinking of it would be very appropriate to think of the etheric body as a foundation for the physical body. For the ideas I am going to propose I think of the etheric body as both enveloping and interpenetrating the physical body and also linking to the next body higher up the ladder spiritually that I will talk about in the next post. The etheric body is also the 'template' that our physical bodies are based on. This body channels the appropriate energies to the proper physical organs in our bodies. In the ideas I am working on the etheric body would also 'have' the wounds and 'have' the memories, both the beautiful and the horrible ones of a previous life. Drawing again on a huge amount of other people's work and ideas; in my imaginings-lets say -lets actually use two examples both male and female-because in my story the idea of both being female and male are very important.


First let us use the thought experiment of a woman during the French revolution who goes to the guillotine. I am thinking in her next life perhaps she has an odd birthmark on her neck-maybe a fear of public spectacles, perhaps even a fear of sharp knives. Let us also imagine a man is shot to death by someone he thought of as a close friend-in this man's last moments he realizes that for all these years this 'friend' was after nothing more than his wife-money -whatever and that in addition the man also realizes in his last moments in the previous existence that his 'friend' actually secretly hated him all these years and finally lets suppose that when the man is shot, he is shot many times. In my theorizing and ponderings maybe in this man's next life he has a very hard time trusting anyone, it is so extreme it causes him lifelong problems. I can also imagine in the next existence this man has a series of strange birthmarks, discolorations-maybe even moles on his skin. I thought of this last one example to use because on my body I have a large number of dark moles all over my body, they really stand out as my skin is very light colored, with this part of me it could be genetic-but no one else in my family is this way and I wonder if sometimes (not using this particular example in my story) that the etheric body 'remembers' where to put the information from the previous existence on the body in the next life-just not in the same way the 'information' happened in the first. I can even imagine that using our hypothetical woman who was beheaded, that if she went to the guillotine in her twenty-seventh year in 1793, that maybe on her next go around when she turns twenty-seven in 1993 that perhaps this is when the strange discoloration on her neck appears-in other words she is not born with it. The 'information' synchronizes in her life in the way the events happened in her previous life. We can even imagine that her fear of crowds and spectacles does not appear until she is twenty-seven or maybe appears earlier after she sees a painting of Jean Paul Marat that for some reason chills her to the bone and she has no idea why. I am going to see how this post looks and continue with my theorizing about the etheric body in the next post. I did not want to do two about it originally but I think I have some other thoughts I need to gather.
Posted by Devin at 12:42 AM

Excellent Devin - How I do love musings & the phrase "I wonder".
I definitely feel the need to broaden my past, because this life alone just doesn't 'fit' any more.
It's interesting that we can talk so unemotionaly about possible past lives, but if such scenarios exitsed, what happened to the those emotions? Isn't a lot of the reason for human sacrifice, the harnessing of fear created - perhaps it's not guilt /karma that traps the human race, but fear?

Ok off to read your next instalment.
I hope you are well & building a hearty appetite for tomorrow :)

wise "I wonder" is also my favorite or one of my favorite phrases I really hope you continue the line of thinking about a past you may have had that was in one of your very recent posts-you have a great sense of intuition and if your mind is telling you to follow this I definetly think you should. This 'life' of mine just does not fit anymore either-I do not know if i am heading down the wrong track with my feelings-of a reincarnation experience-but synchonicities keep on popping up all over the place-the night Bucharest was here I was thinking that this would be a one-off kind of thing-and low and behold a very short amount of time later the Romanian town of Craiova was here-it was literally separated by hours-oh in a minute i have some synchs involving my stuff that happened to me in the space of an hour on the computer a few nights ago names wise-unintended pun there as you can probably tell i am tired but need to stay up-it is only 335 here-my blog time is an hour behind AZ time best to you as always and I'll be in NZ in a few minutes thru the net-like i say i do not know how important this cascade of namesynchs was.

I don't know how much you read of Edgar Cayce, but to a large extent, this pretty much sums up his theory of some diagnoses, especially psychological and psychosomatic ones. He blieved that the reason some cures didn't work was because of psychological trauma suffered in past lives. Some of these lives, he traced back to Atlantis.

I'm in the peculiar position of being somewhat sceptical of reincarnation, despite the fact that I have a concrete memory from a past life. To briefly summarize, I remember my death out of being thrown out of a car in the mountains of California in 1957 (at the tender age of 17). My gut tells me that there is another phenomenon happening here (e.g., memory transference, a forgotten dream that the conscious mind somehow retained, etc.).

Reading this, I realize that I don't have phsyical marks consistent with cranial trauma, facial lacerations (I apparently went through a window), neck or shoulder injury, or anything else that I could attribute to the memory. Perhaps you might consider this evidence only of a false memory. But in this case, I would actually begin to look more towards allegorical or metaphoric marks. I'm unsure where that would fit, to speak the "plane" truth.

BTW, if we ever start up the 23rd Mandalation, you'll be the first person I invite:-) Season's greetings.

X-thanks so very much for your kind and thougtful comments! I really appreciate the invite-my story of reincarnation-may indeed to turn out to be memory transference-minds in the ether maybe?-then there is a whole new realm of maybes and questions i hope to get out -i think this 'reincarnation series' is going to be very long running and speculative(providing of course i am going to be around and healthy enough) there are probably going to be many twists and turns-false starts etc-but I love mysteries and this is a good one-especially because when i am energetic enough to investigate-synchronicities pop up all over the place-w/regard to place names,personal names,timestamps on comments even and sycnhs also popping up right and left when i view the work that people i link to like yourselves do-the latest one was Shiva-at Michaels gosporn site-just fascinating stuff-I would love to here more of your tale-is it at x spot? perhaps i will be there in a matter of minutes/hours-very interesting-best to you and yours X-i really appreciate your commenting here and all the hard work you do at your site! you have a bunch of stuff in your archives i need to read!

Unfortunately, no. I put it on the 23rd Mandalation. I have to write my cyberfriend, Suki, and ask her to turn off the redirect.

Thats cool X-if you ever want to post any of it here feel free-I hope to post 'my' story soon of what got me into this theorizing-it also came about in the late 80s and I denied it for a long time-but I just cant anymore-I only wish my story could be a bit more romantic and a different era-but the truth is the truth-dont know if I will ever know any concrete answers.Best to you and have a wonderful new year and your family also!