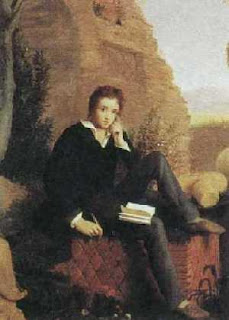 Swiftly walk o'er the western wave,
Spirit of the Night!
Out of the misty eastern cave,
Where, all the long and lone daylight,
Thou wovest dreams of joy and fear,
Which makes thee terrible and dear-
Swift be thy flight!

Wrap thy form in a mantle gray,
Star--inwrought!
Blind with thine hair the eyes of day;
Kiss her until she be wearied out,
Then wander o'er the city, and sea, and land,
Touching all with thine opiate wand-
Come, long-sought!

When I arose and saw the dawn,
I sighed for thee;
When light rode high, and the dew was gone,
And noon lay heavy on flower and tree,
And the weary day turned to his rest,
Lingering like an unloved guest,
I sighed for thee.

Thy brother Death came, and cried,
Wouldst thou me?
Thy sweet child Sleep, the filmy-eyed,
Murmered like a noontide bee,
Shall I nestle near thy side?
Wouldst thou me?-And I replied,
No, not thee!

Of neither would I ask the boon
I ask of thee, beloved Night-
Swift be thine approaching flight,
Come soon, soon!


Two beings fought it out in the body of Percy Bysshe Shelley. One was an uncompromising zealot, a passionate seeker after the truth. The other was a victim of illusions, "a beautiful and ineffectual angel, beating in the void his luminous wings in vain." Even as a child Shelley was brilliant and hypersensitive, resentful of all authority. These characteristics, together with his physical beauty, made him unpopular among his fellows. His schooling at Eton and Oxford was a long misery. He was cruelly mocked by the younger boys, badgered and bullied by the older students. As a result Shelley became so non-conformist that he refused to accept any form of discipline. When an Eton master found Shelley's room full of blue chemical flames, the young scientist explained "Sir I am trying to call up the Devil." At nineteen Shelley was expelled from Oxford for having published, anonymously, 'The Necessity of Atheism'.

Shelley died in a probable boating accident with Lieutenant Edward Williams. On July 1, 1822, they had sailed together to greet Byron and Leigh Hunt, who had arrived in Italy. On July 8, 1822 they started to return and never arrived. Two weeks later their bodies washed ashore and because of the plague, the bodies were buried in quicklime. However, Trelawny and other friends dug them up and burned their corpses on the beach, Trelawny snatched the poet's heart out of the pyre. Shelley's ashes were collected and buried in the Protestant Cemetary in Rome, where the body of Keats had been interred. Had he lived another month he would have turned 30 years old. When Shelley's body had washed ashore a volume of Keats was found in his pocket. "Poets, wrote Shelley at the conclusion of The Defense of Poetry, "are the unacknowledged legislators of the world." I hope to have more of Shelley's work here in the future and more about his short, but very interesting life.
Posted by Devin at 12:01 AM

Funnily enough I have some info about his wife sitting on the desk in front of me, the page also shows Shelly's funeral pyre on the beach! - it's the second synch I've had with a blogger this evening or should I say 'To Night'!

wise I had just had to edit the post above this 3 times and I didn't realize you had commented-you know it really is amazing the synchs that occur to me when I am corresponding with you or Michael and two wonderful people I know from the Rigorous Intuition site. I owe my 'discovery' of William Blake to a person at that site!
To Night! and be well indeed wise-I always love it when you stop by!

wise, on another note and never being able to stop at one comment-the Shelley poem was not the one I had originally intended-I wanted to do a female poet (well not 'do' as yanks sometimes say(wink)-but her poem was simply to long-will do it in the future-but the writing in the book it was out of was so small that I had to translate it to notebook paper to see better as the lighting in here is not bright enough at night for small type-the Shelley poem kind of flopped open as I was thumbing through the book-a used copy-and the person who had had it b4 me had made many enthusiastic notes-so I took that as a 'sign' and maybe it turned into a 'synch'
Best to you!-Devin

Wow! What a tragic story!! Nothing like inherent duality to really pit one-self against thy-self! Pity.

What a beautiful poem and a terrific birthday gift [posted on the 29th I see]. Thanks bro.

Hope your feeling well and pass along a hello from my 4 feline friends to yours.

Michael-I will have more to this story in the future-did you have a recent b-day on nov 29? if so happy happy birthday to you and many more-you are a truly great and nice guy as wise is a great and nice lady
ps tell your felines-didnt realize you had 4 i said hi! I already told clementina you said hi-she says hi back in catspeak!
hope to be back in a bit -take care and be well!-Devin