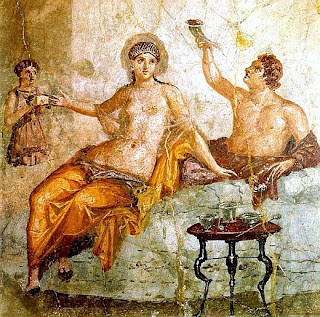 The imperial party visited Hermopolis Magna, the chief shrine of Thoth, the god of science, letters, and philosophy. This site had long been visited by Greek tourists. The Hellenic equivalent of Thoth was the god Hermes. There is some historical evidence that Hadrian spent some time in the city, maybe discussing the occult arts with the local priests, as Thoth was also the god of magic and astrology. Maybe in this same journey Antinous heard of a fifteen year old girl, Isidora. Isidora had drowned only a year or so ago and because she had drowned in the Nile, the giver of eternal life, she had become the deity of a local cult. The cult was assimilated to Isis in Egyptian worship and the water nymphs in Greek worship.


The imperial entourage was probably at Hermopolis while the festival of the Nile was being celebrated on 22 October. Normally this would have been a very joyous occasion with many exuberant feelings being expressed with music, echoes of gratitude over the waters for its gifts of life and river boats great and small brightly lit with lamps as they floated serenely on its waters. By October 130 AD there could not have been the same scenes playing out on it and along its shores. For two years the great river had refused its blessings. In all likelihood there were pleadings and incantations of prayer beckoning Osiris to come back from the dead and bring the life giving flood waters with him. There was a little settlement downstream and opposite Hermopolis. The very modest village had mud huts and the only building of any distinction was a temple of Rameses II, itself also comparitively humble in scale. Thoth and the gods of old Egypt were worshipped here, Ra, Hathor and Harachte amog them. The local people also had another deity they worshipped which we will talk about in the next part.
The image is of a fresco discovered at Herculaneum, one of the major cities destroyed by Vesuvius when it erupted in 79 AD.

Greetings Devin
Hope you are well on this fine day.

Hmmm...for some strange reason I kept thinking of Heath Ledger as I read this latest post!

Best wishes to you

Wise! Like always I am delighted to see you here-your thoughts and comments are always so appreciated. I do not know what it is wise-but I really seem to be meshing so much with your thoughts lately. Just as I was typing the last part in the above post that very death came to mind! Peace and best to you as always! I hope you and your family had a great day also!