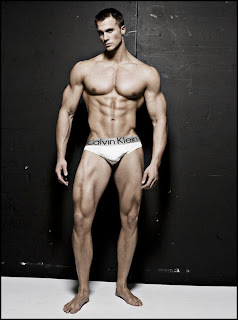 One of the things I forgot to mention in the previous article, is the fascinating property that if one could travel at the speed of light-or ride on a beam of light-time would stop completely. Time would cease to exist for the traveller. For light time has no meaning. If it takes light 2.3 million years to travel from the Milky Way Galaxy to the Andromeda Galaxy-from the ray of lights perspective the trip happened instantly-literally taking no time at all.

As physical objects in our universe travel ever closer to the speed of light, time begins to slow down tremendously the closer one gets to light-speed. If humanity ever manages to build a starship capable of travelling at a very significant percentage of the speed of light, using a matter/antimatter propulsion system for instance, travelling at 99.99999.... percent the speed of light, not only are the stars within our galaxy within reach of the passengers of such a ship in the typical human lifespan but travel to the furthest galaxies in the universe could be conceivably possible within such a lifespan due to time dilation.

The Aura, Light and Spirituality

From page 165 of Michael Talbot's The Holographic Universe: "One mystical phenomenon that appears to involve the ability to see reality's frequency aspects is the aura, or human energy field. The notion that there is a subtle field of energy around the human body, a a halolike envelope of light that exists just beyond normal human perception, can be found in many ancient traditions. In India, sacred writings that date back over five thousand years refer to this life energy as prana. In China, since the third millenium B.C., it has been called ch'i and is believed to be the energy that flows through the acupuncture meridian system. Kabbalah, a Jewish mystical philosophy that arose in the sixth century B.C., calls this vital principle nefish and teaches that an egg-shaped bubble of iridescence surrounds every human body.

Many cultures believe the aura of an extremely spiritual individual is so bright it is visible even to normal human perception, which is why so many traditions, including Christian, Chinese, Japanese, Tibetan, and Egyptian, depict saints as having halos or other circular symbols around their heads. In his book on miracles Thurston devotes an entire chapter to accounts of luminous phenomena associated with Catholic saints, and both Neumann and Sai Baba are reported to have occasionally had visible auras of light around them. The great Sufi mystic Hazrat Inayat Khan, who died in 1927, is said to have sometimes given off so much light that people could actually read by it."

And from pages 288-89 in the same book, Talbot talks of how consciousness is not only more fundamental than matter, but how consciousness actually "projects" the physical world: "Because everything unfolds out of the irreducible totality of Brahman, the world is also a seamless whole, say the Hindus, and it is again maya that keeps us from realizing there is ultimately no such thing as separateness. Maya severs the united consciousness so that the object is seen as other than the self and then as split up into the multitudinous objects in the universe," says the Vedic scholar Sir John Woodroffe. "And there is such objectivity as long as [humanity's] consciousness is veiled or contracted. But in the ultimate basis of experience the divergence has gone, for in it lie, in undifferentiated mass, experiencer, experience, and the experienced."

"The same concept can be found in Judaic thought. According to Kabbalistic tradition "the entire creation is an illusory projection of the transcendental aspects of God," says Leo Schaya, a Swiss expert on the Kabbalah. However, despite its illusory nature, it is not complete nothingness, "for every reflection of reality, even remote, broken up and transient, necessarily possesses something of its cause." The idea that the creation set into motion by the God of Genesis is an illusion is reflected even in the Hebrew language, for as the Zohar, a thirteenth-century Kabbalistic commentary on the Torah and the most famous of the esoteric Judaic texts, notes, the verb baro, "to create" implies, the idea of "creating an illusion."

From one of Jeff Wells' many excellent articles at Rigorous Intuition- "Are You Being Served?" : "One work in particular resonates with this alien DNA argument. Entitled "What A Human Being Is," it depicts a twisted double strand that looks remarkably like a DNA molecule. This was about 50 years before Francis Crick and James Watson won the Nobel prize for the discovery. Aliens talking? Remote Viewing? These sorts of "coincidences" are just the sort of thing that orthodox Ufologists routinely ignore to their peril.

As well, on the RI forum thread, "Attack Ships on Fire" smartly noted that along with the DNA-like double helix, "there appears to be a prism effect happening near the base...[of the picture] another odd connection/premonition about DNA being able to emit photons of light."

The picture Jeff is referring to is by artist Af Klint ca. 1910, pictured below. I would highly suggest reading both of Jeff's articles that are linked in my article. Thanks again everyone for all of your thoughtful and intelligent comments! I hope to have the next article here pretty soon. 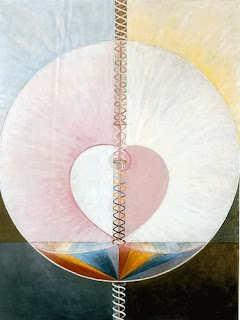