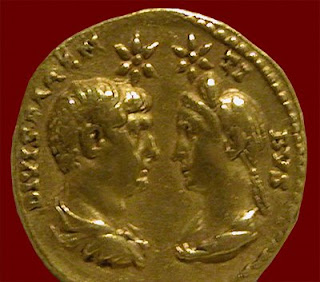 I am indebted to Royston Lambert's wonderful book, Beloved and God, for much of the information and ideas for this series of posts.
When Hadrian became emperor after Trajan's death in 117 A.D., the Roman Empire was at its height as far as the physical extent of the empire and its power over other nations. Part of the genius of the Roman Empire was the integration as opposed to subjugation of many, but not all of the peoples it conquered. Trajan himself had been born into a non-patrician family in the Hispania Baetica province in what would be modern day Spain. Vast works of engineering connected Rome to its far flung provinces. Some Roman roads are still in use today. Technology for brining water into cities had been developed in the east, but was transformed by the Romans into a technology inconceivable elsewhere. The Romans were known for their vast engineering accomplishments and even though some were improvements over existing ideas, their accomplishments surpassed most other civilizations of the time. Many Roman structures have withstood the test of time and were an inspiration to others, especially during the Renaissance.
This was the enormous, wealthy and proud empire Hadrian inherited from Trajan.

Hadrian was not adopted by Trajan to be the next emperor in a vacuum (although there are some questions regarding this as we shall see.) Fatherless at the age of ten, Hadrian became the ward of two other important men from Italica in Rome. Acilius Attianus was a knight, who later played a crucial part in Hadrian's accession. Trajan and his wife Plotina were a much more important influence on Hadrian's character. Trajan was the cousin of Hadrian's father and was 22 years older. Trajan's father and Hadrian's paternal grandmother were brother and sister. Plotina was born in Neumauses -modern day Nimes, France. She was a devoted follower of the Epicurean school of philosophy. Plotina is thought to have influenced Trajan to provide for fairer taxation for Romans, improved education, assisted the poor and helped to create tolerance in Roman society.

Trajan was childless and Hadrian was the nearest male relative. Hadrian married Sabina in 100 A.D.-she was between 12 to 14 years old at the time. Sabina was Trajan's great niece and his nearest unmarried female relative. This was a move to secure the succession for Hadrian and it was Plotina who persuaded the reluctant Trajan to agree to this vital marriage. Even after this there was a major problem. Trajan never openly acknowledged Hadrian as his successor. Hadrian did not rise more quickly through his official career than other men. He held the usual magistracies in Rome and military tribunates in Germany and on the Danube in 95-96 A.D. He was Trajan's quaestor to the Senate in 101, tribune of the plebs in 105. He was a commander in the Dacian war of 105-6, a strict governor of Pannonia in 107 and consul in 108 A.D. There were occasions when Trajan did seem to openly favor him, he rewarded Hadrian's military victories with the same diamond ring he had received from Nerva. The people of Athens also saw Hadrian as the official heir-they elected him archon or chief magistrate in 112.

There were a few different reasons Trajan may have been reluctant to bring himself to openly acknowledge Hadrian as his successor. The two men were greatly different in nature, even though historians see many similarities in the policies of their reigns. Trajan's personality was that of a direct, open and honest man, some believed he looked stupid although this obviously was not the case. Hadrian was just the opposite. He took delight in his own appearance and was quite the dandy. Hadrian sported a well groomed, short beard and was the first emperor to do so- all of his successors followed this trend. He was taller than average and had fair skin. His grey-blue eyes were close set and his most memorable features apart from his prominent cheeks and strong nose were his eyes and mouth. Hadrian had a strong build. Hadrian was no intellectual, but he was friends with some of the most civilized men of his day and he endowed Rome with an excellent library. Here is a direct quote from Beloved and God: "But if the replies from Pliny's endless requests from Bithynia are his, or even reflect his opinions, he is revealed as a man of considerable wisdom, patience, and sensitivity, scrupulous of the rights of individuals and localities, though with perhaps an amused contempt for 'those poor Greeks', and lacking in curiosity."

Hadrian did share one trait with Trajan. That trait being the love of boys and beautiful young men, and this perhaps brought them into conflict at times. Whatever the causes of their conflicts in relation to one another it is obvious it went from so hot that it had sexual overtones. At times there was open hostility promoted by the jealous Servianus. Plotina again came to the rescue and got Hadrian the legateship of Syria in the Parthian war.

Trajan died in Cilicia after suffering a stroke while hurrying back to Rome. Trajan's stroke occurred after his disastrous campaign in Parthia to confront dissent within the Empire. Hadrian had been in Antioch at the time in charge of the army of the east. He received letters of his adoption as heir on 9 August 117 A.D. and news of Trajan's death on the 11th. It has been rumored for centuries that Plotina had forged the letters and kept news of her husband's death quiet for days so that they could be delivered. Plotina was a very resourceful and intelligent woman and there is no doubt she did whatever she could do to help Hadrian in this crisis. It was even rumored that she poisoned her husband's valet who knew too much. It was also rumored that she hired an actor after Trajan's death, to impersonate him. This of course being done to adopt Hadrian and confirm the succession. Whatever actions Plotina did or didn't take-maybe they only confirmed her husbands intentions-maybe not. This is one of the many reasons I find this story so fascinating. There are so many twists and turns and complete mysteries that we can only guess at-but we can make educated guesses.

Dear reader, I hope you have enjoyed this set of posts. I need to take some time off and confirm where I want to go with this story next. The next installment should be a week from now at the latest. In the meantime I am going to try to find one or two poems that would accentuate this story and post them before the next Hadrian and Antinous post. I am also waiting on one or two bits of news that I will post here if they happen before then. I also had some off-topic thoughts I was going to post about the roles we play in our day to day lives and what they reveal about our inner nature and the human heart-this after a row with my on again off again boyfriend-but I haven't decided to do this yet as I don't want to stray to far from the current topic. Peace and blessings be to you all. Hope to see you at MFM soon. Please feel free to comment-I love getting comments-I will post pretty much anything as long as it isn't hate mail-I also enjoy constructive critcism and if there are any details or facts I have got wrong-or even just the way I write-please comment.
Posted by Devin at 12:02 AM

I'm enjoying this series, as well as discovering your delightful prose and poetry. I know of course that the love between an older patron and a younger man was an integral part of Roman culture, but I don't know any details.

Michael, Very much appreciated your comment-I hope you continue to come by-there may not be anything new on this series for 4-5 days but I hope to have some poetry here within a day or two.
Peace and be well!-Devin
ps- I missed an important and intersting part of the succession-that will lead the next post which will go into Antinous and how Hadrian and he came to know one another. There are many details of history that I am learning too-being a gay man myself-i was a bit nervous to go into the erastes-eromenos relatioships of ancient Greece-don't know how much I will touch on this-I don't want to be misread as promoting the idea-thanks again for stopping by!-Devin

Hi Devin
I was wondering about Hadrian as I read this instalment. A little while ago I came across some ideas about reincarnation - suggesting sucessive life personalities for a some historically 'important' people.
I looked at Winston Churchill who was said to have been the famous Greek orator & statesman, Pericles as well as Priam, King of Troy. So I couldn't help wondering if such be the case who Hadrian turned into?

wise woman-so glad you stopped by! i was just at too long in this place and left a comment under your 7-31 post (solomon grundy)-very interesting comment by you here- I hadn't heard that about Churchill before-Pericles would probably be a good one for him-I almost think sometimes that the 'free-dumbs' we enjoy here in the states will be like Periclean Athens compared to what we will have in the future! Let me think on the Hadrian question-that is a great comment as I want to do 'memorial posts' here and there for US and foreign leaders who I liked that have passed on-Hopefully if I am still on this mortal coil in April I want to do a very large post for Martin Luther King-and would appreciate any comments from you and other readers about appropriate prose to go with this post. Best to you as always wise, and I can't wait to read through all of your archives-Devin