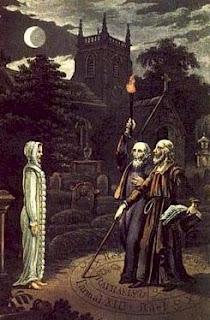 "March 1oth 1582: 11:15 a.m. Saturday
One Mr. Edward Talbot came to my house...being willing and desirous to see or show some thing to spiritual practice...And I truly executed myself therin, as not in the vulagarly accounted magic...But confessed myself long time to have been desirous to have help in my philosophical studies through the company and information of the blessed Angels of God...He then seated himself to the action, and on his knees at my desk (setting the stone before him) fell to prayer and entreaty...And within one quarter of an hour (or less) he had sight of one in the stone. And after some thanks to God, and welcome to the good Creature...I recquired to know his name. And he spoke plainly (to the hearing if Edward Talbot) that his name is Uriel. "Are you one of them," (said I, John Dee) 'that are answerable to this stone?' URIEL: 'I am.'

This was the first meeting that began the astonishing partnership of John Dee and the scyer Edward Talbot. Talbot would soon come to be known as Edward Kelley. By this time, Dr. John Dee was a living legend. He was a man of such skills of observation and learning in so many different areas of knowledge that many not only respected him to the utmost, but many feared him because of his esoteric knowledge. In the time of the Elizabethan Age the great universal hierarchy and the existence of angels were widely believed in and taken for granted by many. But most people of the age feared the supernatural and anyone who claimed to be in contact with angels or hidden powers would be viewed with deep suspicion by most alive at the time. Remember that the Devil and his legions of demons were as real to these people as God and his angels-and of course the Devil was a master of trickery. How, people from the common folk up to royalty asked, could a magus know for sure that he was dealing with friendly spirits and not the "Prince of Lies" fooling him with deceits? Dr. John Dee's Sagittarian ascendant horoscope showed he was a bold adventurer and not averse to take risks in his quest for knowledge. The navigational errors he made (he also knew much about the mechanics of physical navigation) could provide us with landmarks that say "Here be Dragons!" or "Stop!"

John Dee was born in 1527 and by the age of 15 in 1542 he began his studies at Cambridge. At this young age, he very quickly became known for his scholarship and brilliance of mind. In 1546 he became one of the original fellows of Trinity College. It was at Trinity where he became famous for constructing the giant flying beetle for the stage play that for some was just too good! This beetle to many in the audience was simply too wonderful-too real. Many thought that the giant beetle could only have been created with the help of the Devil. This incident began the pattern that would repeat for the rest of Dee's life; suspicion and backstabbing followed by success in some areas. Dee travelled after Cambridge, and gave a series of much acclaimed lectures in France. In France and elsewhere in Europe, Dee made the acquaintance of men who had esoteric interests and understanding. These men were versed in traditions like alchemy, magic and the Kabbalah. Of course, Dee was already an expert-even a savant in mathematics, classics, astronomy, astrology, navigation, history and antiquities. Medicine and law would soon be added to the long list of Dee's detailed knowledge. Dee was definitely a "hands-on" explorer and went on tours of England to record knowledge firsthand: from ancient monuments, local legends of hauntings and buried treasure.

People from all across England did trust Dee and sought out his knowledge-even coming from overseas. Queen Elizabeth I, whom he had chosen a coronation date for using astrological methods, was a regular visitor. Sadly, Elizabeth never gave Dee quite the respect he had hoped for. Dee also became famous as an author, especially for his preface to Euclid and for his treatise on his Monas Hieroglyphica-his glyph that symbolized and embodied cosmic unity. Dr. John Dee wanted to go beyond what books could tell him about the mysteries of creation. He wanted gnosis of cosmic creation and emanation. It isn't known with certainty if Dee was initiated into any particular esoteric practice. Some commentators think he was a key figure in the development of Rosicrucianism, and he definitely practiced forms of magic, Kabbalah and alchemy. Dee seems to have preferred being a lone practitioner of these arts however. Interestingly, doing his own studies proclaimed Dee a groundbreaker. But working individually meant working without the safety net that is usually provided by an established tradition. In the beginning, Dee was suspicous of Kelley. He was afraid Kelley was out to "entrap" him. Scyers didn't have the best of reputations. They were known to not only falsify information and cheat their employers. But they were also feared for their ways of leading a Christian soul astray and only dark paths trodden by evil spirits.

Since ancient times, however, there were precedents for communications with angels and other celestial beings. Cornelius Agrippa in his Three Books of Occult Philosophy, published in the early 1500s, talks of the great cosmic ladder. In this vision, angels are the ministers of God's virtues. They also have knowledge of a powerful magic that can raise us to their level. "Wise men conceive it no way irrational that it should be possible for us to ascend by the same degrees through each world, to the very original world itself, the Maker of all things and First Cause...and also to enjoy not only these virtues, which are already in the more excellent kind of things, but also besides there, to draw virtues from above," wrote Agippa. So these practices were not unknown. But until Dee, and his Spiritual Diaries, which were not originally intended for publication, there were no such direct records as Dee and Kelley tried to understand these "angelic" communications. Apparently Dee used a scryer because he himself didn't have the ability to "see." He finally trusted Kelley enough to pay him a salary after looking for several years for a medium to work with.

The" spiritual conferences" with Kelley were painstakingly set up. Before a session there were purification rituals, prayers, psalm recitations and fasting. Kelley's visions usually appeared in a crystal or "show-stone." Gradually other devices were added to the ritual. There was an intricately constructed table, often referred to in the transcripts, and inscribed seal, and the famous obsidain "magic mirror," of ancient Aztec origin. The sessions were usually done in a study or oratory. However, flexibility was recquired when Dee and Kelley travelled abroad with their familes. Sometimes family life intruded as Dee notes in one session: "we were earnestly called for to Supper by my folks," this ending it. One unknown is how the transcripts of the sessions were kept so carefully and fastidiously. The "angels" often delivered speeches that were hundreds of words long. It is also doubtful they spoke at dictation speed! Some of the transcripts look like they were rewritten later in a different-perhaps more careful hand. A lot of the transcripts and recorded data are about Kelley's understanding of what the angels and spirits said to him and descriptions of them. The questions posed by Dee and Kelley would ask the angels for an answer. In the Spiritual Diaries a series of complex tables of letters and numbers appear that are apparently a key to the angelic language.

The image is of Dee and Kelley conjuring and communicating with a "spirit." I thought I got a bit further than I ended up-I still have 13 pages (both sides) of information to go! The information here and in the articles to come, is largely from a fantastic article called "Dr. Dee and the Spirits." This article appeared in the summer 1995 edition of Gnosis magazine and was written by Cherry Gilchrist. I hope to have the next article here very soon-maybe tomorrow. Thanks again so very much for your wise, thoughtful and intelligent comments! Peace and be well everyone!

Great stuff Devin
Am getting so much out of this, it seems to be adding to a train of thought I'm on too, can't quite put my finger on it.
This seems to pre-echo all the channelled info that has flowed in over the last 40 years - sounds good but leads nowhere IMHO.
I hope those 13 pages aren't too tiring.
Very best to you & Clementina

Alex thanks so very much for stopping by!! I am the worst typist in the world-or almost:) just now posted article about 555 pm our time and the post time will tell when i started it. Alex I am also so glad you mentioned about the channelled info-I was thinking about how much some of the items with Dee and Kelley remind me of channelled info!! all the best to you my friend-I so appreciate your interest and thoughtful and intelligent comments!! best to you and yours also and tell your son happy bday from me tomorrow and the rest of your fam -including pets:) they also get a hug from me as well!!

Hmmmm, it looks as though you've an "in" with the world's foremost Dr Dee scholar, Lon Milo DuQuette… have you? GASP! My word veri is "Azathe" … I'll be damned if that doesn't sound like the name of one of Dee's summoned demons, spirits, or little known angels! LOL! Great mastery of the written art have ye, Goodly Sir! Thanks again, Devin, for this highly informative series on one of High Magick's most influential personalities.

Anadae! I am so glad you are enjoying this and I am so glad I did not lose your comment! Thanks as always for your links and information-really really appreciate it! Justin told me how to do live links in comments sections -so now hopefully I will be able to do the same for other people-havent even had a chance to practice yet so dont know if I can do it-best to you as always my friend and thanks so much for stopping by!!

Devin;
This is such a wonderful series. You really put across a lot of information in an accessible way. The more I read about Dee, the more I think that American needs to become a lot more liberal so that all ideas are given credit and merit. We still have such a puritanical way of dealing with people in magical arts. Even though we're supposed to be a country of free religions, I don't share with many people that my belief system is more pagan-based and that I'm not a Christian. I think that makes for a lot of isolation and in isolation people can't find their full potential. Dee had so much to contribute if people could get over the church men's talk of devils and demons. Oh brother! (rolling my eyes). Thanks for this series. Hard to believe 500 years later and we still have trouble letting these prophets and sorcerers be heard. I think that until formal religions die, there's little hope for our evolution, at least socially and perhaps intellectually since we deny knowledge that doesn't fit our church's belief systems.

Autumnforest thanks so very much for your comment and observations!! I agree totally a hundred percent and like you I keep thinking about how we are still struggling with this stuff 500 years later!! I am going to try to put article 13 up-they may need to do some maintenance here-so i hope i can get it done-not sure yet anyway about the maint. as always so appreciate you stopping by and best to you as always!!